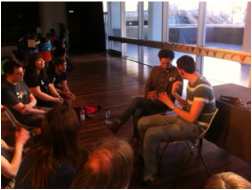 Just like the quintessential TV show, experts hear and tell stories about ‘treasured family heirlooms’ But are they in the know or just blindly guessing? You decide.

Played at FarmFest, and H&S Sandpit

Early Days (of a Better Nation) 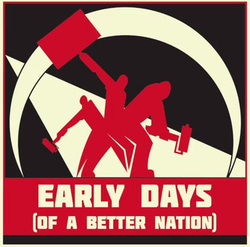 The revolution is over and it’s time to start shaping your new nation. Your country can be anything it wants to be. What are the rules you’re going to live by?

This show in development is a response to the political turbulence of recent years where new forms of citizenship, protest and participation have taken centre stage in broadcast and social media: the 2011 England riots, Arab Spring, a crowd-sourced constitution in Iceland, the rise (and fall) of Occupy, the Indignados and Anonymous.

With a dynamic combination of theatre and a playing audience, Early Days (of a better nation) explores the possibilities of nationhood and democracy in a political game of unintended consequences.

This Land is Your Land

This land is yours now, can you make it be the nation you deserve? Work together to save your nation from slipping away while you try to build Utopia on its shores. But can you survive with your morals intact? This game is part of the development of Early Days of a Better Nation - an interactive theatrical experience which has played out at BAC in London and Welsh National Theatre in Cardiff. Players take control of the events to try to beat the game. NOTE: We’ll be talking about the ongoing process of making Early Days of a Better Nation at 18:00 11th August. 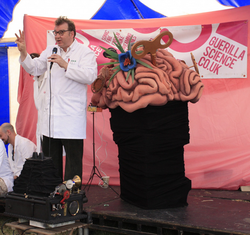 A game for Guerrilla Science to introduce people to the concept of synaesthesia. Played at the Secret Garden Party Festival and Green Man Festival.
Scientist Dr Koch (played by Alyn Gwyndaf) has created a giant cyborg brain that has synaesthesia, every colour it sees it also hears - through 'science' we can hear the colours too. The game is played by a crowd of colourfully dressed festival goers, collectively showing the brain's giant eye the colours it needs in order to play the right chord.
Computer vision created by sonic artist/coder Simon Katan with consultation of Tom Wright of Sussex University.
Tom wrote about the project here.

Reds in Your Beds

Murder on the Moors