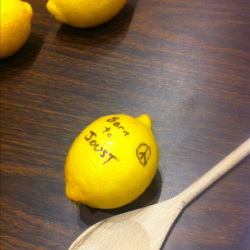 Not so much jousting as fencing, but definitely involving lemons. As the only person willing to claim that they were present at the invention of this devilish game of citric dueling, I have adopted responsibility for it. Created at a Coney Playday workshop.

This game has become the poster-child for 'folk games' and featured in talks at GDC, GameCity and beyond.
It has become a 'viral' real world game played all over the world at parties and festivals alike. 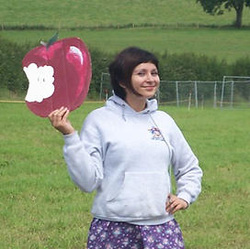 A real-world version of the classic computer game Snake, except the snakes are conga lines and the 'apples' are potential players holding up cardboard cut-outs of fruit.

How to play - Human Snake on Ludocity.org

Bernie De Koven wrote a lovely article about this game for his educational series A Playful Path. 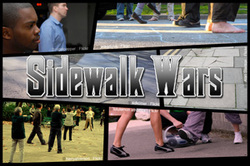 Sure, running around and intimidating people gets things done, but someone's got to be the brains behind the operation. There are two families wanting to own this same one street, and the first side to get themselves connected is going to win out. One problem - they've got your boss hostage, but then again - you've got theirs.

Sidewalk Wars is a game of strategy, quick footwork and even quicker wits. Suitable for all the family, especially Godfathers.

This Land is Your Land

This land is yours now, can you make it be the nation you deserve? Work together to save your nation from slipping away while you try to build Utopia on its shores. But can you survive with your morals intact? This game is part of the development of Early Days of a Better Nation - an interactive theatrical experience which has played out at BAC in London and Welsh National Theatre in Cardiff. Players take control of the events to try to beat the game. NOTE: We’ll be talking about the ongoing process of making Early Days of a Better Nation at 18:00 11th August.

Kill your own Grandfather 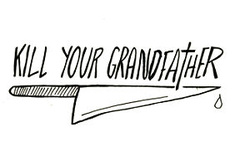 I ran a design workshop for w+k designers to create a street game for the COaP festival in New York. This is the game that we collectively designed.
__
Be the team to control the most time zones when the game ends. Try not to get assassinated by anyone.Montagues vs. Capulets. Hatfields vs. McCoys. Green vs. Yellow.

You’re a member of a family that’s had a generations-long feud with another family. And members of both families are time-travelers.
Will you successfully erase your rivals from history? Or will the star-crossed-in-love youngest member of your own family execute their grandparent, causing a rift in time and space that swallows up all of existence?